Enjoy your tax cuts while they last 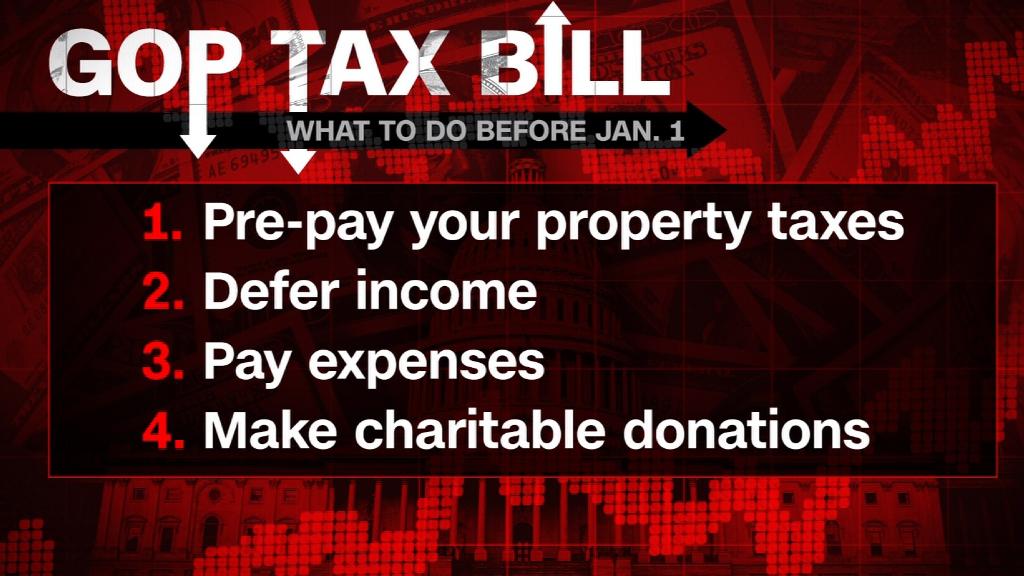 A lot of households under the GOP tax plan, which President Trump is set to sign into law this week, will see a lower tax bill in the next several years.

The nonpartisan Joint Committee on Taxation estimates that in 2019, more than half of filers making $40,000 and up will see an average tax cut greater than $500. That trend holds for income groups over $50,000in the subsequent years measured through 2025.

The Tax Institute at H&R Block provided some scenarios of people with young children, for instance, who could see their tax burden drop by roughly $2,000or more next year.

But here’s the thing: After 2025, all individual tax cuts are set to expire. At the same time, corporate rate cuts are made permanent under the bill.

As a result, by 2027 a large majority of people making less than $200,000 will either see little change in their tax bill or a tax increase relative to what they pay today, the JCT estimates.

Related: Try the CNN tax calculator to see how you may fare under GOP bill

Republicans made individual tax cuts temporary so they could meet budget rules that let them pass their tax overhaul with no Democratic votes.

But don’t worry, they say. A future Congress won’t let middle class tax cuts expire. Recent precedents — like the oft-extended Bush tax cuts — suggest they may be right. Still, there’s zero guarantee of that. After all, a lot can change over eight years.

In any case, there’s another reason you could end up with a tax increase after 2025.

While the cuts are temporary, the GOP tax bill makes permanent another key provision that tax expert Lily Batchelder has described as a “stealth tax increase” for individuals, the effects of which will grow over time.

The money it will raise is a big reason why the cost of the permanent corporate tax cuts will be paid for in the second decade, according to Batchelder, a tax law professor at New York University.

The GOP plan introduces a new, slower inflation measure called chained CPI that will apply to inflation-adjusted parts of the tax code. So, for example, the income ranges that apply to each of the seven income tax rates will grow more slowly. So will the value of many tax credits and the income phaseout thresholds for various tax breaks. Those thresholds dictate whether you make too much money to qualify for certain breaks.

The upshot for tax filers is this: Many tax breaks, Batchelder said,“will be worth less over time than they are under current law. And people will gradually be pushed into higher tax brackets over time.”